The ecological waste for textiles and... 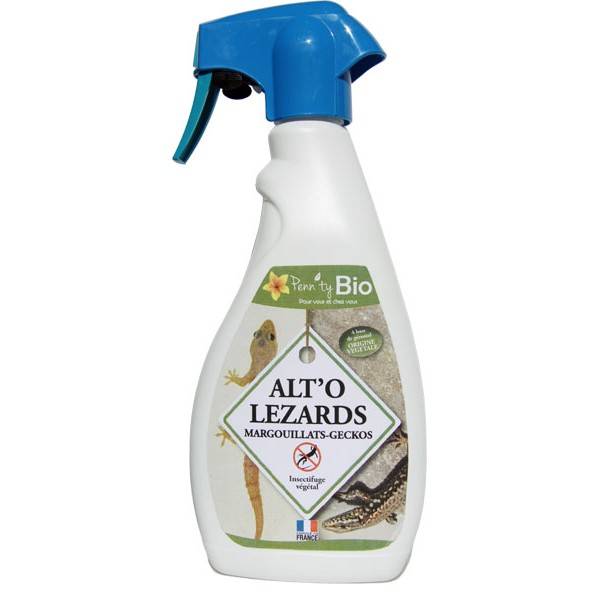 ALT'O LEZARDS allows you to fight against the nuisance caused by lizards, margouillats and geckos inside and outside your home. Composed of an active ingredient of plant origin, it acts by olfactory action on small reptiles. 500ml bottle. 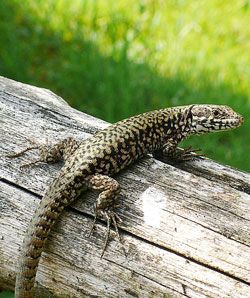 In some areas, lizards, margouillats, geckos... can be very invasive. They invest the facades, terraces, swimming pool, rocks, garages, house interiors. and wet the surfaces. 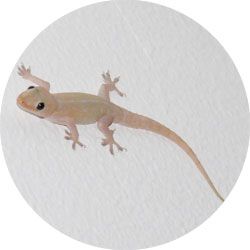 Indeed, beyond the fear of some people in the face of these small reptiles, they have a relentless tendency to weld the surfaces on which they move. Walls, terraces, luminaires, objects of any kind ... It can even become a daily fight.

ALT'O LEZARDS has been developed for fight against the nuisances caused by lizards, margouillats and geckos to theinterior house and houseexterior (balcony, terrace). Composed of géraniol, one of plant origin, it acts by olfactory action on small reptiles to effectively push back areas to protect. This natural repulsive diffuses an incommodating odor for small reptiles and encourages them to move away spontaneously (acts on the sensory receptors of reptiles).

As a ready-to-use sprayer, ALT'O LEZARDS applies to places of passages of reptiles. It doesn't spot the surfaces. Warning, this product is not made to be sprayed live on the animal.

He is very simple use. On a clean surface, spray the product evenly for 3 to 7 strikes of tarpaulin in areas frequented by lizards (air-conditioners, near light sources ...) and their places of passage (door frames and windows).

+ Efficiently distances lizards, margouillats and geckos
+Composed of a 100% vegetal asset: géraniol
+Without chemical additive
+Agit by olfactory action
+ Protects your surfaces and objects from welding

Zoom on the main active 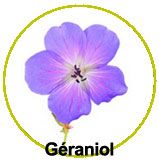 Géraniol : Géraniol is obtained by fractional distillation from the Cympobogon Winterianus Jowitt plant by extracting all impurities without any chemical means. He's part of the family of monotonous alcohols. The Geraniol comes in the form of a colorless liquid and releases a pleasant smell of rose. Geraniol is naturally present in many essential fruits, vegetables, spices and oils. Thanks to its floral odor and special properties, géraniol is used in many areas of application ( cosmetic, pharmaceutical, food, detergents) and in particular as an anti-insect solution. It's an excellent larvicide and ovicide. It acts whatever the stage of metamorphosis (egg, larva, adult) by stifling and dehydration acting on the chitine. It is often found in insecticide or repulsive products to strengthen their action. Moreover, its odor indisposes small reptiles by acting on their sensory receptors. This substance is effective on a broad spectrum. 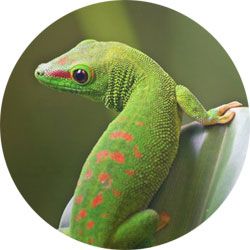 Shake well before work. Pre-test a hidden surface because some fragile materials can be stained. On a clean surface, spray the product evenly for 3 to 7 strikes of tarpaulin in areas frequented by lizards (air-conditioners, near light sources ...) and their places of passage (door frames and windows). Let it dry. On porous surfaces (dallage, claustras ...) and/or as soon as the lizards return, renew the operation twice or three times by respecting a 12-hour period between two treatments.

The predators of the lizards

The predators of the lizards are the cats for whom they are real toys! But the hedgehogs and birds also enjoy it. If his agility makes him escape from his predators, the lizard of walls can live 4 or 6 years.

The beneficial action of lizards

In the garden and at home, the lizard is an interesting small auxiliary because it will get rid of different animals to feed: spiders, caterpillars, grilles, cribs, grasshoppers but also to earth, aphids, flies and other insects. If the lizards and other geckos do not disturb you in your daily life and do not cause any particular damage, it is therefore best to leave them in peace!

The lizards find their origin in the primitive reptiles observed at the beginning of the Permian era, 340 million years ago. So much to say they were here long before us! There are lizards on almost every continent of the planet, except in polar regions.

The lizard of walls (Podarcis muralis) is the most commonly encountered in France and Europe. From the Lacertidae family, this climbing species that likes around the houses should not be confused with the Geckos or mabouyas of the West Indies and African (also called Margouillats to the Island of the Meeting) which they invest without restraint the interiors of dwellings. According to the French regions, he was given different names: rapiette, langrotte, larmuze, larmeuse, lagremuze, larmouise ...

The lizard of the walls measures around 20 cm of maximum length, including tail. He has four legs with a long fingertips that are used to grab him when he climbs vertically. Its color varies according to the specimens: its scaled body can be grey, brown, greenish, more or less strewn, allowing it to be confused with the stones on which it often walks. His skin makes a mue by successive plates that he eats. Her belly is clearer. It is very fearful, extremely fast and therefore very difficult to catch. You will not see it (or little) during the winter because they hibernate and sleep a lot. This cold-blooded animal loves sunbathing. It is therefore very common to observe it on the exterior walls of the dwellings, walls in dry stones, rocks, rocks ...

The Gecko, this little lizard with a very special sound, is very common to him inside the houses, in the closets, in the vases, on the walls, in brief, everywhere. It is equipped with adhesive fingers that allow them to climb on all surfaces (even the glass which is deemed to be perfectly smooth) It is part of a large group of lizards found in all warm regions of the planet. It is quite common to see it at the ceiling in the evening, near a source of light attracting insects of all kinds and ringing dinner time.

In the majority of lizards, one can observe a very surprising phenomenon: Faced with a predator, reptile cuts his tail instead of losing life. This is called caudal autonomy. This organ sacrifice is possible thanks to the presence of cracks in some vertebrae. After detached, the tail continues to stir on the ground. The predator, captivated by this movement, forgets the other piece of his prey: the lizard takes advantage of it to escape, while limiting the damage through blood vessels with contractile sphincters that avoid blood loss. His tail then rebuilt, not without difficulty for the little animal, but it allowed him to save his skin !

Do not apply directly to animals. Wash your hands carefully after use. Store only in the original packaging. Do not reuse the empty packaging. Keep away from food and beverages including those for animals. Avoid contact with the eyes. Don't interfere. Do not throw residue in sewers or streams. Eliminate empty darts packaging.

P101 - If a doctor is consulted, keep the container or label available. P102 - Keep out of reach of children. P103 - Read carefully and respect all the instructions. Eliminate empty darts packaging. Use biocides with precautions and if necessary appropriate protection.

Powder shampoo for the shower -...

Insecticide for all ecological... 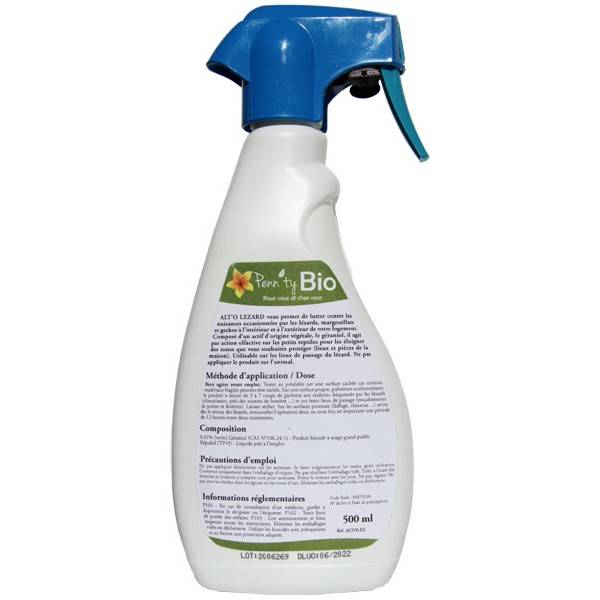