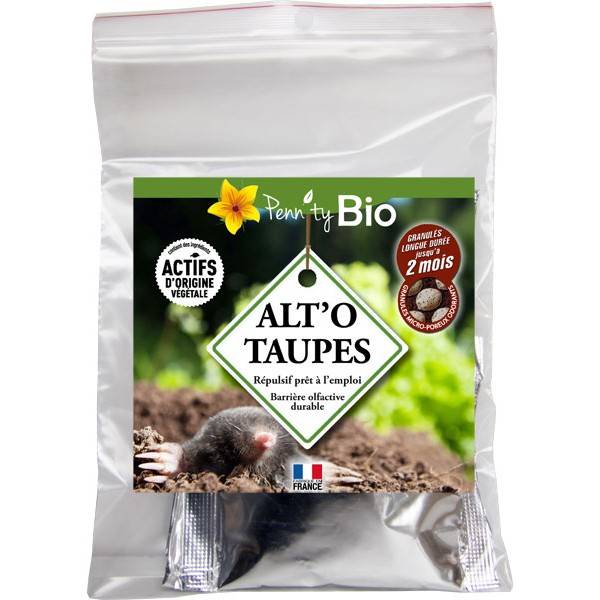 Repulsive moles Ready to use in the form of micro-porous odorant granules allows to push the moles by creating an effective and sustainable olfactory barrier. Long-term action up to 2 months. 100 grits. 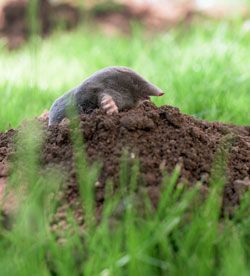 The mole is a small mammal, widespread in Europe. It loves gardens, fields, vegetable gardens and all fields worked. This small animal, which we rarely see, lives underground by forming large galleries. One realizes his presence when one sees the beads of fine earth mounds in his garden. And every spring, the moles go to the attack. It can dig up to 20 meters of galleries a day. Its activity on a land can range between 500 and 3000 m2 depending on the richness of food (from 5 to 10 moles per hectare). If you're a fan of irreproachable turfs, the taupe is very likely to play with your nerves by rendering your land without underneath it!

ALT'O Moles is a solution for to fight the damage caused by the moles. It offers an effective and sustainable olfactory barrier up to 2 months. We know the mole has a very sensitive smell. It is on this principle that the composition of Alt'o moles is based. This product is composed of micro-porous granules impregnated with an active ingredient (Géraniol) that disturbs the smell to push them from the treated area.

Once the granules spread in the molten, they will release a smell that will make the gallery uninhabitable. As a result, you will effectively push them from your land. The aesthetics of your garden is found. The risks of fall and injury due to the earthworms or the raised slabs are thus avoided.

ALT’O Moles is ready for use and easy to use. You can use it, either to push the moles already present, or in preventive action. Careful, the effect remains limited if the soil is clay, marshy or wet.

- Hunting and preventing the intrusion of moles by creating an olfactory barrier
- Long-term action up to 2 months
- 1 sachet = about 30 treated moleculars
- Composed of géraniol, a plant-based asset
- Sold without blister, per bag of 100 grs
- Offensive for pets 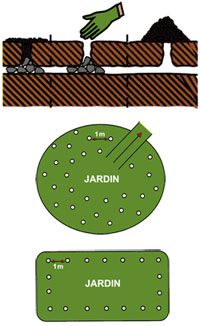 In case of low infestation : Sprinkle the molten and introduce a dozen granules. Rebuild the gallery with earth or a grass to make the mole not see the light and avoid leaving the earth in the orifice. Treat all the moles. The granules release a smell that makes the gallery uninhabitable. Treat all the new moleculars that appear and this until their total disappearance.

In case of strong infestation : Place 5 to 6 granules at about 1 meter interval and 15/20 cm deep then close the hole. Do not encircle the animal and leave a free path so that it can flee. Do not directly introduce the granule into the molten or in the galleries. After treatment, flatten the molten.

Preventive use : Place 5 to 6 granules at about 1 meter interval and 15/20 cm deep then close the hole. In spring, we advise you to form a protection barrier around the area to be protected.

ALT'O Moles is usable throughout the year. Attention to the heavy periods of activity of the moles that are often linked to changes in time. Indeed, periods of thawing, rain after drought, in particular, require the moles to renovate or expand their network often because they follow the earth worms in depth and that they migrate up or down depending on the temperature or humidity of the soil.

Hermetic aluminium bag of 100 grams for 20 to 30 teats (depending on the degree of infestation).

How do we differentiate you from the campagnol?

It is not always obvious whether the earth mound is linked to the presence of a mole or a campagnol. The trick is simple to differentiate them:
The mole : vertical arrival, fine earth.
The campagnol : oblique arrival, granular land.

Zoom on the mole, an underground carnival

Not sociable, the mole lives underground where she digs galleries to find her food. The mole loves fresh earth, furniture and rich in worms and larvae or insects. It consumes 90% of earthworm (about 50 grams a day) and 10% of cochenilles, larvae, slugs or white worms. True gloutonne, it eats the equivalent of half its weight daily. Without food, it can die in a very short period of time (less than 12 hours), hence its absolute necessity to find what to eat and expand its hunting territory to other portions of land.

Carry protective gloves during use. Wash your hands carefully after use. Clean the holes in the ground to avoid falls. Keep out of reach children and pets. Keep away from food and beverages, including those for animals. Avoid contact with the eyes. After use, close the packaging well. Do not reuse the empty packaging. Store in the original container, in a dry place. Do not throw the residue in the wastes and streams.

P101: If a doctor is consulted, keep the container or label available. P102: Keep out of reach of children. P103: Read the label before use. P270: Do not eat, drink or smoke by manipulating this product. P301+P310: In case of ingestion, call a poison centre or a doctor immediately. P501: Eliminate content/recipient in an approved dock or body. EUH208: Contains Geraniol (106-24-1). Can produce an allergic reaction. 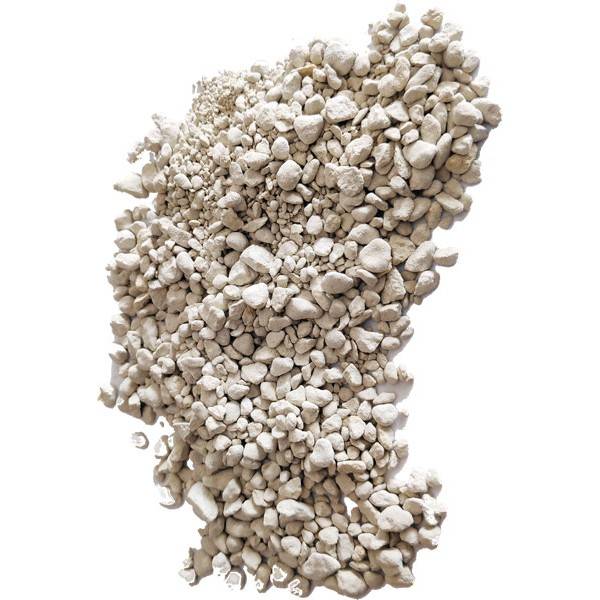