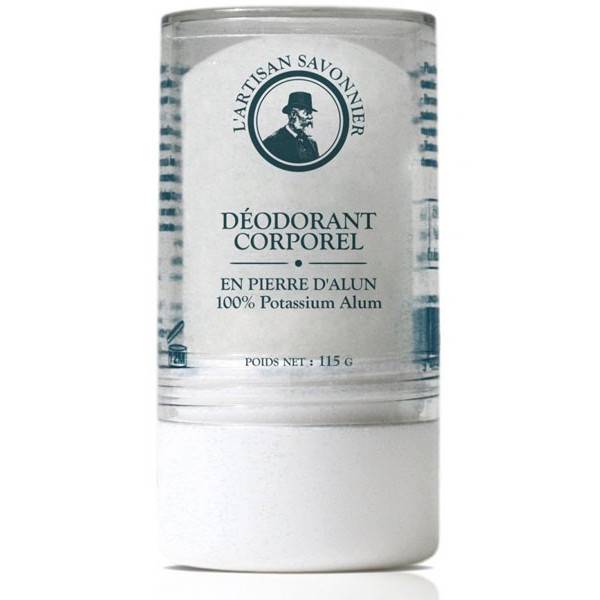 The Body deodorant in Alun Stone of potassium the Artisan Savonnier is used as a classic deodorant. Thanks to its astringent properties, alun's potassium regulates bacterial development at the origin of unpleasant odours of perspiration. 115 gr stick. 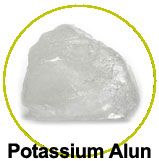 Body deodorant L'Artisan Savonnier en Alun Potassium Stone from the GRAVIER Laboratory is used as a classic deodorant. Thanks to its astringent properties, alun's potassium regulates bacterial development at the origin of unpleasant odours of perspiration.

Natural Alun Stone: Potassium Alun
The stone deodorant of the GRAVIER Laboratory is made of 100% potassium alun.
- In accordance with existing cosmetic regulations (R. 5131-2, Ord. No. 2000-548 of 15 June 2000), the stone deodorant of the GRAVIER Laboratory was clinically tested: it is not irritating, not allergic.
- Mineral origin 100% pure Alun de Potassium, Garanti without aluminum hydrochloride and not reconstituted.
- No smell, no alcohol, no color.
- No parabens.
- Not tested on animals.

Our opinion:Especially economic (up to 1 year of use for 115g)

Precautions of employment :
- Keep out of reach of children.
- Avoid contact with eyes and mucous membranes.
- Avoid application on a skin that has just been shaved or shaved.
- Don't interfere.
- Do not drop (the moonstone can break).
- Protect moisture after use

Learn more about the Alun Stone:
There are 2 types of Alun Stone on the market:
- She says " natural "that is made up of potassium alun from mining.
- She says " synthetic synthetic "that is made of ammonium alun, residue of the heavy chemical industry. Its use could pose risks to human health, including the presence of aluminum hydrochloride. As such, it is prohibited by the GRAVIER Laboratory.

To properly choose its stone deodorant from Alun, only the chemical analysis of the composition can determine which Alun it is. This is the only undeniable scientific criterion. The name inci potassium alum must appear clearly and unambiguously on the packaging label of the deodorant. This is why the GRAVIER Laboratory conducts regular analyses ensuring the exclusive use of the entirely natural potassium alum.

Solid face cleaner for dry and...